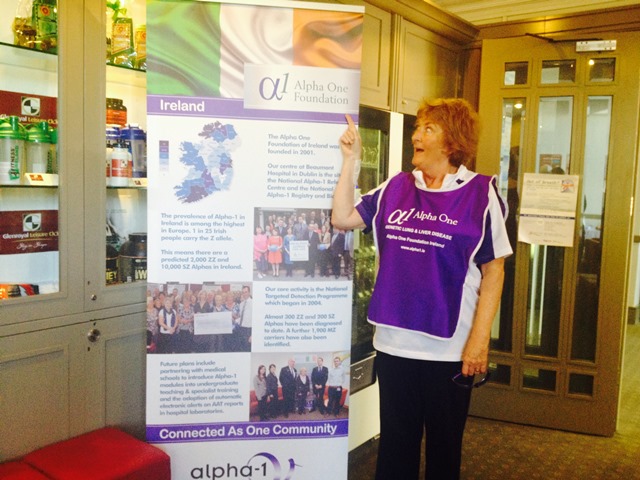 Spring cleaning may not be good for your health. This was the experience of one Maynooth resident following her enthusiastic assault on a long-neglected oven. The cleaning agent used by Orla Keane, 56, triggered a serious respiratory reaction, but the cause of her problem was probably a predisposition to a particular genetic disease.

It all began one day in 1996 when Orla, having cleaned the cooker, began to get breathless. “I thought nothing of it until I headed off on my bike, then it got worse and worse,” says Orla. Alarmed she went to her GP, who sent her on to Peamount Hospital in Newcastle, Co. Dublin. “They did a lung function test and mine was way down,” she says. “So they treated me for asthma and told me to use inhalers and to keep a diary of how I was feeling.”

Nonetheless, Orla, a mother of one, did not seem to get any better. When she returned to Peamount, she was seen by a young doctor who did a specialised blood test. As this sample had to be sent away for analysis, they only got the result six weeks later. Orla was about to go on holiday to Wexford with some of her siblings and her husband, Tom. “I went back to see this young doctor and he said I had a “nasty genetic disease” called alpha-1 antitrypsin [Alpha-1] deficiency. I immediately thought I had contracted something highly contagious. It put the fear of God in me,” Orla recalls. “Then the nurse asked me if I was going to be contactable while on holiday. I naturally thought that meant it was lights out – I was a goner.” Orla was so flustered, she left the hospital with very little practical information. She then headed off on the “most miserable holiday” of her life. “Tom and I cried. We didn’t know if I was going to live or die. The inhalers didn’t work; I couldn’t do any of the things I usually do with the family. I couldn’t swim, couldn’t walk and felt like a woman of a hundred.”

Orla pictured at the annual coffee morning she holds in aid of Alpha-1.

According to Kitty O’Connor, CEO of Alpha-1 Foundation Ireland, which supports those living with this condition, alpha-1 antitrypsin is an important protein produced by the liver, which is released into the bloodstream and travels to the lungs. There, it provides protection from the destructive effects of infections and harmful irritants, particularly tobacco smoke. “Alpha-1 is a genetic condition which, along with cystic fibrosis, is the commonest genetic lung disease in Ireland,” says Kitty. “It severely affects more than 3,000 people nationally, with another 10,000 also at risk of lung and liver disease. It is the only proven genetic risk factor for COPD (chronic obstructive pulmonary disease).” She says Alpha-1 is a seriously under-diagnosed condition – especially in Ireland. It can affect the lungs, or the liver, or both. In the case of infants, who may have had prolonged jaundice, the liver will be compromised.

In Orla’s case, the lungs are her main problem. She says her history as a smoker didn’t help, but she had quit four years before her diagnosis. “It’s never too later to give up cigarettes,” she says with deep conviction. Orla explains that while the oven-cleaning agent triggered the asthma-like attached that led to her diagnosis, it was not the root cause. She had been carrying the two defective genes responsible for the disease all her life. “It was lurking in my system and could have come out at any time,” she says. The main treatment remained inhalers, and, over time, they began to kick in. Exercise also proved to be a boon. Late in 1996, the Glenroyal Hotel and Leisure Centre opened in Maynooth, and Orla and a couple of friends were soon members. “I started by wading up and down the pool,” she says. “Three weeks later, I was able to join the aquarobics class. I called it my physiotherapy – it helped to clear my lungs. I eventually became a fitness instructor and did that for five years. The social aspect of the leisure centre helped – especially after my mum died last year.”

Here, Orla reveals that her father was Paddy Crosbie – he of School Around the Corner fame. “He loved my mother so much he wrote her a poem every day of his life,” says Orla. “Sadly, he died in 1982.” In 1999, Orla met a young student doctor at Peamount who, unlike most other medical people, knew quite a lot about Alpha-1. He told her about Professor Gerry McElvaney, who was conducting research at Beaumont Hospital into the condition and Orla was soon his patient. “He’s brilliant. The level of care is excellent,” she says. In 2006, she was invited to participate in clinical trials for a new drug for Alpha-1. “I’m on it, even though it hasn’t been passed here yet – it has been approved in the US,” she says. Every week a nurse comes to the house and administers the trial drug intravenously. Orla says it contains the blood protein that is lacking in people born with Alpha-1. “The other patients and myself on the drug feel we are getting fewer infections; also, my lung function hasn’t deteriorated,” she notes. 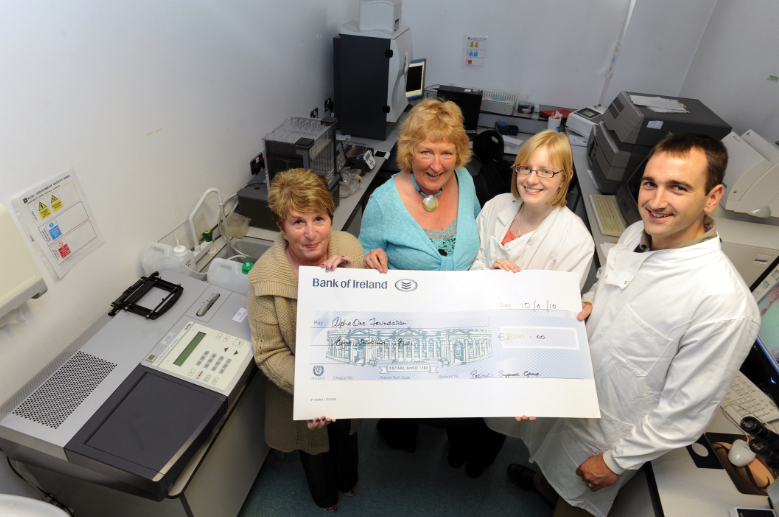 Orla has now devoted her life to raising awareness about this condition. “They used to think it was very rare, but now they know it’s not nearly as rare as they thought it was – it’s just rarely diagnosed,” Orla explains. She is also working hard to collect funds for a machine at Beaumont Hospital that can diagnose Alpha-1 more quickly and accurately. Orla has already participated in 13 fund-raising mini-marathons and plans to do more. She has helped to organise slimathons, a charity fashion sale, and, in conjunction with a cystic fibrosis group, a midsummer ball. Every October she attends the annual Chopin Recital at the Mansion House. It is believed that Frederic Chopin suffered from chronic respiratory disease, probably Alpha-1, during his short life. Fortunately Orla is luckier than this great composer.

“If I hadn’t been diagnosed early, I wouldn’t be here now,” she concludes before heading off on a bicycle, singing her mantra: “Get busy living”.

This article first appeared in the Sunday Independent LIFE supplement in September 2012. Thanks to Joy Orpen for permission to reproduce her work.

What is Alpha-1 Antitrypsin?

Alpha-1 antitrypsin is a vital protein produced by the liver to protect the lungs. It provides protection from the harmful effects of infections and inhaled irritants, particularly tobacco smoke. It can be easily measured by a simple blood test.

What is Alpha-1 Antitrypsin Deficiency?

Alpha-1 antitrypsin deficiency (Alpha-1) is a genetic condition which, after cystic fibrosis, is the commonest genetic disorder in Ireland. It severely affects more than 15,000 people, with another 250,000 carriers also at risk of lung and liver disease on the island of Ireland. It is a proven genetic risk factor for chronic obstructive pulmonary disease (COPD).

How Do I Get Tested?

The Alpha-1 Foundation Ireland provides free testing for Alpha-1 as part of a national screening programme which is funded by the HSE.  It is a simple blood test.  For more details ring 01-8093871 or email alpha1@rcsi.ie